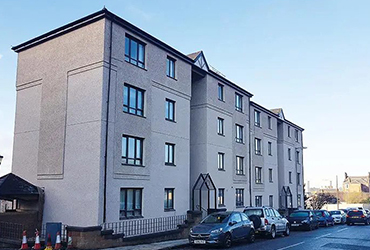 THE STORY OF MUIRYHALL STREET

1. Hammer test the blocks annually ata cost of circa £16,000 per annun to the owners.
2. Render the blocks in a pin and scrim system, this protecting the blocks.

Aquila was formed because the owners wished to go for option 2. Option 2 meant a cost of £230,000 to the owners and the need for a factor to carry the works forward. Aquila was appointed as the block factor, replacing Ross and Liddel and immediately worked hard to obtain a section 30 grant to carry out the works. The works were completed in September 2018 on budget and were managed under a JCT Contract by Aquila’s own Quantity Surveyors.

Since taking over the tenure and management of these blocks, Aquila have completed the following:

Working with the owners, we have turned this block into a desirable residence in central Coatbridge. We plan to continue the improvements by recarpeting stairwells amongst other items.

If you would like to follow a similar route, and take ownership of your site and work in partnership with your factor, then this is the model to follow.

This site uses Akismet to reduce spam. Learn how your comment data is processed.